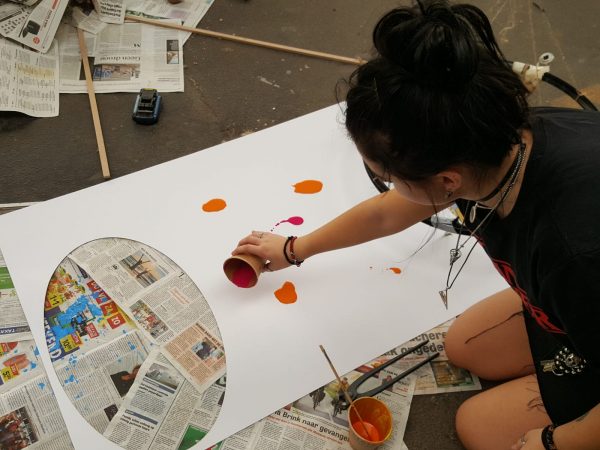 In our first Technology lesson we had to make a machine that would be able to make a painting.

EXPERIMENT
Together with my partners Daan and Loes, we used an wheel and tied 3 different sized brushes on different places. We tied the wheel to a rope hanging from the ceiling.
We let the machine glide over the paper using magenta, cyan and yellow (for some we mixed orange). For some we moved it side to side, for some we let it spin, for some we used both technics at the same time.

EXPERIMENT
We decided to make an second machine out of a really long pipe, jokingly called it “the bazooka”. We let it lean on a trashcan, making it stand up right. We let the same paint colours as in the first machine fall through the pipe down on a canvas.

This gave beautiful splatter effects and the coloured started mixing in the pipes and fell out in different colours after a while. What I found the most interesting though, was the effect of the paint droplets falling out of the pipes on a different coloured paint and what effect this gave.

And as a bonus, amazing pictures of me working! Thanks Loes!!